“Everything I do is for the 17-year-old version of myself”, said Virgil Abloh, explaining how, every day for the last decade, he has given new meaning and vitality to the generational codes of luxury, style and consumption. He has now come to hold the creative keys to a colossus such as LVMH. So who will be able to take up his legacy?

He did not like to define himself. It’s no coincidence that he said of himself: “I’m not a designer“. He preferred the acronym TBD, “To Be Defined“, Virgil Abloh. A perfect formula for tracing his career, which went from DJ to creative director of Louis Vuitton’s menswear. Here, however, on 28 November 2021, at the age of 41, destiny crystallised it forever, decreeing, beyond the shock and grief at his passing, the eternal consecration of Abloh as a creative genius who has burnt the generational codes of luxury and unhinged all its consumer dynamics.

Because if today all we do is talking about how “young people” can and will drive sales in the high-end fashion system, much of the credit is due to him, who has transcended categories and genres and made luxury no longer something for the rich, static, old and conservative. He has made luxury no longer a static, old-fashioned, conservative affair for the rich, but a niche in obsessive evolution, one that it is important to be a part of because it bets everything on the exclusivity of a hype that never loses its intensity. Young people’s stuff, in short.

Burning the generational codes of luxury

A heretic. And, as such, capable of burning the generational codes of a luxury that spoke only to itself. He has dirtied it, hybridised it, thrown it out into the street, to use a metaphor that is as fitting as ever. He played, in the true sense of the word, with every accessory, product and item of clothing in the light of an approach that, in the utmost seriousness (otherwise he would not have landed at Vuitton), imposed the winning idea of taking itself less seriously. The ideal synthesis of all this is his manifesto phrase: “Everything I do is for the 17-year-old version of myself”. And as chance would have it, ask a 17-year-old today who Abloh was and he’ll answer. This is not so obvious with many other top designers. 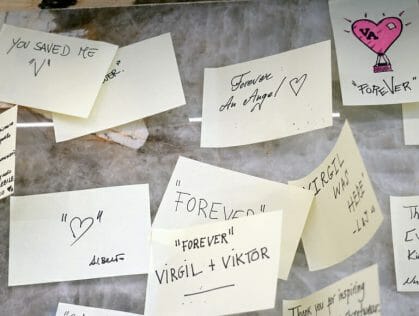 Abloh’s disruptive idea, in a nutshell, was this: mix US streetwear with European fashion. And vice versa. “Vintage Levi’s are as important as a Hermès bag and today they come together in the same outfit,” he said. With this (unsettling) truth in his pocket, Abloh took his first steps into the fashion system in 2009, when he and Kanye West did a six-month internship at Fendi for $500 a month. In 2012, Abloh founded Pyrex Vision, which closed the following year.

The next project hit the mark. It is Off-White, which bases its success on the strategic union between the stylistic sensibility of stars and stripes streetwear and the quality of Italian manufacturing“. Off-White is the ideal training ground for Abloh to experiment relentlessly with what he calls “the 3% approach“. In other words, it is enough to modify 3% of the product to make it seem both familiar and completely new.

His language becomes a shared language

For the designer who, writes Business of Fashion, is “almost as if he had created his language, his own vocabulary” the consecration comes in March 2018. Louis Vuitton appoints him as creative director of menswear. “You can do it too,” writes the designer on Instagram soon after. “Virgil was not only a brilliant designer, a visionary: he was also a man with a beautiful soul and great wisdom,” says Bernard Arnault on LVMH’s social profiles. The Wisdom that he shows, for example, when in 2020, he declares:

“Streetwear is dead“. Then he clarifies: “I meant that new things like fashion (coming) from guys like Nigo and me will be born from the regeneration of streetwear”. Well, if there was one thing Abloh wasn’t afraid of, it was chasing “the new”. An act of courage so contagious, vital and monetizable that in July 2021 LVMH gave him carte blanche, guaranteeing him the possibility of launching brands and signing partnerships with all the brands in the LVMH galaxy. An absolute recognition, the reasons for which are perfectly summed up in the words of Silvia Venturini Fendi, who knew him in his early days. “Virgil undoubtedly represents the great change that fashion has undergone in recent years. We can no longer speak of a designer because the definition of a designer is perhaps also reductive“.

Who will be his successor?

As we write (Friday 17 December 2021) we still do not know. But speculation is rife. The most controversial and at the same time, for many, the least credible (until proven otherwise) was launched by The Sun by naming Kanye West, who shared the internship at Fendi with Abloh. A cumbersome personality and an unfriendly character, West would mark the disruptive boundaries of the “Abloh dimension” even deeper.

But many believe that this is too risky a move for Vuitton. Hypebeast puts Daniel Lee, formerly of Bottega Veneta, and Kris van Assche, formerly of Berluti, in pole position, with Riccardo Tisci (Burberry) in the second row. But “it would be a missed opportunity if Louis Vuitton did not take into consideration the generation of brilliant black designers that grew up around Abloh”, writes the magazine. One name above all: Reebok’s global creative director, Kerby Jean-Raymond, who, however, has a habit of sending out explicit political messages.

Something Louis Vuitton has always wanted to avoid. The other names are Shayne Oliver, founder of Hood By Air, and Abloh’s collaborators Samuel Ross and Heron Preston. Telfar Clemens is also in the running. Nigo, founder of the streetwear brand A Bathing Ape and current creative director of Kenzo, is also among the favourites. This last hypothesis is the most fascinating: Nigo is a designer that Abloh has always esteemed and who has already released two successful collaborations with Louis Vuitton. Will it be him?

What the judgment won by Alcantara tells us about greenwashing

The ages of luxury: 5 ways to speak to the younger generations

Sustainability and its truth: when the knots come to the boil

A bag is forever: luxury discovers the value of durability

Produce less, produce better: the near future is today