How have fashion, design and their teaching changed in these never-ending months of pandemic? How much does digital transition match with craftsmanship? Let us talk about this with Massimiliano Giornetti, director at Polimoda in Florence

According to Massimiliano Giornetti, fashion is “an anthropological tale”. A kind of narration of the human dimension, which requires a basic condition in order to work: the authenticity of a vision, of a creative approach, of a style. An originality that Giornetti has always been showing in his career. Since he was a student at Polimoda, where he graduated in Fashion Design in collaboration with the London College of Fashion. As a designer, in the entourage of Salvatore Ferragamo. Before that, since 2000, in the Men’s Division, that he began to lead as Creative Director four years later. Then, until 2016, he became the Head of Design of all clothing lines of the Florence house, including the Women’s and Accessories Division.

Later, he took part to the relaunch of the iconic Chinese brand Shanghai Tang. Finally, he brought back home everything (not even too metaphorically) when, in 2019, he became Head of the Design Department at Polimoda and took up the management of the institute in February 2021. Who could describe better than him how fashion, design and their teaching have changed in these longest months of pandemic?

The pandemic pushed 360° digital transition of the fashion industry almost to the limit, for the need to make a virtue out of necessity. How is this process influencing and how is it going to change creative approach of the next generations of designers, in your opinion?

I think the digital transition we are witnessing in the fashion system is a tool and not an aim. Among arts, fashion has been the most agile and dynamic, as it realized from the start the need not to stop and to find new alternative and dynamic solutions. We were resilient. We understood the need for reorganization and the importance of looking for new opportunities without losing our identity. However, I don’t think that the ongoing process will change the creative approach of the new generations of talents. On the contrary, it could be a strong drive to accelerate that change, that has now become necessary. Fashion, the most contemporary kind of art, is sick and it needs the unconditional push that can only come from young talents, untouched by the pressure of marketing and of merchandising. 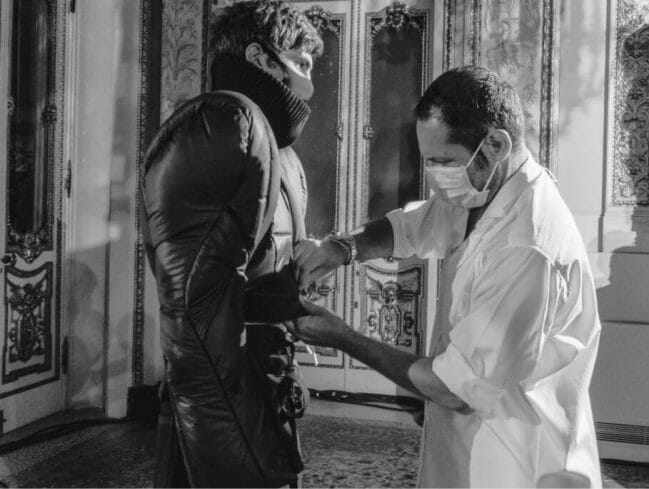 Even before the pandemic, the storytelling of brands had highlighted a kind of pride of the “artisanal intelligence” many accessories derive from (some houses posted a series of videos where they tell about production stages of their shoes). Just to make two examples, Fendi and Dior praised several times their “wonderful craftsmen” (Fendi employed some “external” ones in their Hand in Hand project). How does this renewed attention to craftsmanship match, not only at production level, with processes tied to ”artificial intelligence”?

While the pandemic isolated us, it brought us together again. It made us find out the value of neighbourhood, of being more local and less global. Rediscovering the importance of quality to the detriment of quantity. An oxymoron which lays the foundations for a renaissance. From the capability of matching a concept and the ability to make it real, you can start again taking a run-up, just like during the Renaissance. In my “peripheral” vision, values like dignity, intelligence, creativity, uniqueness add up, as well as a renewed relationship with Nature, bringing back humans to the core of the creative process. I think that this vision, the praise of artisanal culture, is indispensable to tackle hard times in fashion.

What does it mean, also considering the pandemic we are still experiencing, to train creative minds of the next future today?

It is a great responsibility. This pandemic is an open window on change and innovation. The realization that the fashion industry can no longer be the same. The need to influence society again and not being influenced by it. Fashion is an anthropological tale, we can start from the same research of society to seize an opportunity to design a new style. The word “designer” comes from the Latin signum and expresses the full capability of interpreting a style through a sign, a design.

What is the greatest training challenge in the fashion field, nowadays?

Uprooting the attitude to be followers. The lack of drives to get out of the comfort zone is leading to a forced homologation and to the repetition of what is already there. Even at school, there is a strong tendency to follow macro trends, to manipulate ideas and thoughts of other people. It is essential to start from a search which is not based on fashion, but on society, anthropology, aesthetics and politics to open up to the concept of “uniqueness”, which represents the different vision of each person.

How did the full immersion in social media, which is part of the new generations (and not only…), change the mind of those who take up a fashion course? Does it open up the mind of students or does it paradoxically  box it in new models or schemas of thought?

Digitalization killed curiosity and, as a consequence, creativity. It stopped the train of thoughts, reducing gestures to a like. It is distancing ourselves from our body and from the search for space, so that design is becoming more mainstream. Fashion is a body getting into a dress, the passage from the bidimensional to the three-dimensional level. Fashion cannot be only virtual, because it lives on people and with people. Whenever sensorial expression is missing, one of the most important components is missing too: the one involving desire.

The artisanal pride of luxury is told in these 2 videos