In 2016 Jamela A. Acheampong launched the Kahmune project: 10 shades of colour for shoes to match 10 hues of skin. And to the purpose of contradicting the assumption that fashion and beauty “have been built on exclusion”. All of this is 100% made in Italy

Jamela A. Acheampong ‘s project was born in 2016. It is based on a discovery she made personally, starting from a picture of Kim Kardashian, who was wearing a pair of “nude” shoes in a different colour tone from that of her skin. An inconsistency which set off an intuition in Jamela’s mind. “I began to search for products matching my dark skin tone – she tells bustle.com -. All I kept on finding, though, were just the same beige, cream and light brown shades”. That’s where Kahmune’s story starts, together with its sustainable inclusiveness. 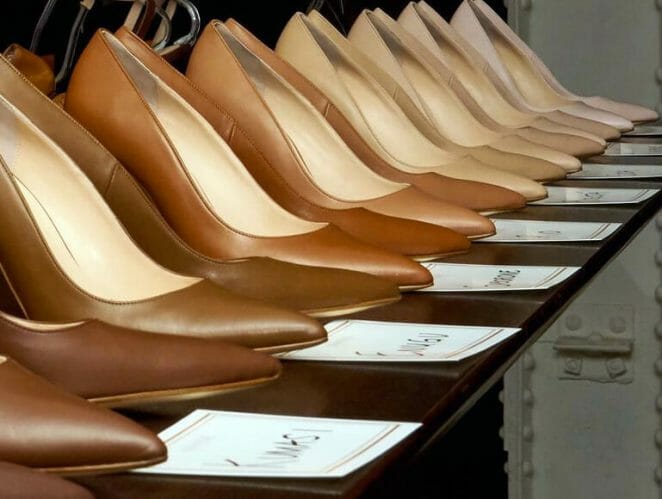 The Kahmune brand is based on a very simple philosophy of variation of the product they started from: shoes. Ten shades of colour to match all skin tones. Three kinds of leather (suede, nappa and patent). No sneakers. All rigorously 100% made in Italy. A few months ago, bags were added, based on the same principle. One model (a tote bag) declined in 10 different shades of leather. Here lies the whole sustainable inclusiveness of Kahmune. And in service: customers can request to receive at their address the leather swatches and choose the closest nuance to the tone of their skin.

Beside its new product, bags, Kahmune can also be proud of something, which demonstrates how much this project is well received. In fact, it cashed in a subsidy of 25.000 dollars to develop the brand in a digital and social way. All of this with an inclusive and social aim, always and come what may. It was not a coincidence, that, in November 2020, Jamela A. Acheampong donated 15% of her sales to three organizations acting in favour of women. That’s sustainability, as well.

Once upon a time there was accessible luxury

Sustainability: is fashion on a turning point or is it (still) at a dead end?

The colour we all need

Pantone creates a new colour for 2022 (never done before)